As more and more First Person Shooters are either being set in dark futuristic mutant/zombie-infested worlds, or during World War II, out of the sunset comes a pale rider bringing with him a different kind of FPS. I don't know about you, but watching the classic Sergio Leone trilogy of spaghetti westerns (A Fistful of Dollars, For a Few Dollars More and The Good, The Bad and The Ugly) really gave me the urge to step into Clint Eastwood's shoes and live out some of those gun-toting scenes against a dozen or more banditos. I'm in luck it seems - Call of Juarez allows you to do the next best thing, and it does it in style.

It's starting to become a common story for some of the best games I've ever played: Call of Juarez went almost completely unnoticed right up until the quiet release of its demo. Apparently it was initially being developed under the name 'The Lawman', but I'd never heard of it before, and I only happened by chance to notice that the demo had been released a little while ago. Knowing very little about the game, my curiosity got the better of me and I installed it. Turns out I made a very good move, it is definitely worth it.

There are many layers of interest to Call of Juarez. The storyline itself, though clichéd, appears well-written and intriguing; the voice acting only goes towards further enhancing the depth of the characters; and of course the icing on the cake is a fantastic game engine which allows for some excellent visual and physics effects, and generally makes the game very immersive and a real joy to play. From the lighting and glass effects, to the detail of the game world and the way it captures the dust and dirt of the Wild West, to the way in which you can actually set various objects on fire and watch the fire spread, varying in speed and intensity based on the material that's burning - all signs of a next-gen game in action.

But, as you would expect from a game which has so much to offer, it is also a bit of a beast to run on most systems. It ranks on par with games like Oblivion both for eye candy and for system requirements in getting things running smoothly. Fortunately the new version of the Chrome engine used by Techland is customizable enough for our purposes, so in this guide we examine in detail what the in-game settings actually do, the issue of game loading times, and how to further tweak and optimize the game using some advanced configuration settings. There are also a range of troubleshooting tips for common problems people experience with this game. Give the guide a read-through and you'll definitely find it easier to heed the Call of Juarez. 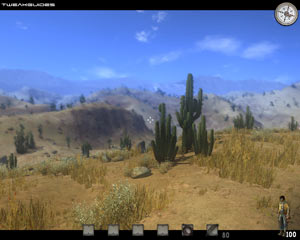 Note: This guide refers to Version 1.1.1.0 of Call of Juarez, including both DX9 and DX10 versions. Check back regularly for updates to the guide.