Imagine if the most talented scientists, artists, writers - the intellectual cream of humanity - all got up and left one day. Picture them moving to a large underwater city built in the 1940s called Rapture, a place where the great are not constrained by the small, a place of discovery and absolute freedom. Then it all starts to go wrong, and somehow you wind up in the midst of all this madness through no choice of your own. This is the basic premise of BioShock, a game which follows in the footsteps of the classic System Shock series.

BioShock is an attempt to blend a primarily action/horror first person shooter game with elements of adventure and role playing games. Though touted as revolutionary, the game is in reality more evolutionary, being a standard FPS that contains innovative new gameplay touches and highly atmospheric graphics, placing it one step above recent action/horror FPS titles. At its core however the gameplay often resembles games like Doom 3 or FEAR. What saves the game from being just another horror shooter is its intriguing storyline, the sheer immersiveness and detail of the environments, and the quirky 1940s-like setting. Since surprise is a major part of the game, I won't give away too much more about it here, but I do believe it's well worth playing. If you have any doubts, download the Demo and give it a go. 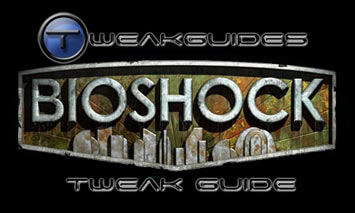 To provide the atmospheric graphics, BioShock utilizes the Unreal Engine 3, giving it advanced capabilities in both DirectX 9 and DirectX 10. The graphics of this game are very detailed and immersive, but obviously this can also cause problems for some people. Furthermore there's been much controversy over the game's widescreen support, issues with anti-aliasing, the fact that it has as a minimum requirement a graphics card with Shader Model 3.0 capabilities, and of course its copy protection mechanism.

Fortunately after a fair bit of research and experimentation, I've been able to prepare this guide as a compilation of all the important information for the game: all the tips, tweaks, fixes and descriptions you need to make sure your BioShock experience is as good as it can possibly be. I encourage you to give it a read through and see for yourself - there should be something for everyone. 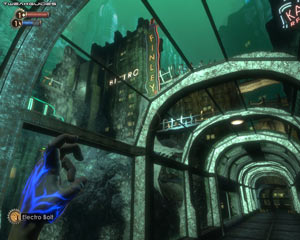 Note: This guide refers to the latest version of BioShock Version 1.1. Make sure to check back regularly for updates.