Ah Star Wars....who can resist its charms. Probably one of the best known movie series in history, with phrases that have permeated our language and of course the famous Lightsaber which every kid (or geeky adult) has wanted to own at one time or another. How many times have you seen someone struggling to do something and urged them on with "Use the Force!". Well, either that or "Run Forrest, run!". Yep, any game which comes out with 'Star Wars' in its title is bound to be at least moderately successful on that basis alone. So what about Star Wars Battlefront  is it worthy of the title?

In my opinion, the answer is Yes. I believe Star Wars Battlefront has what it takes to be a genuine "Star Wars Experience"© For those of you who don't know what the game is, basically it's Battlefield 1942 with a Star Wars theme. That may sound highly unoriginal to some people, but for the most part I believe it works extremely well. The music, the sound effects and the graphics do a very competent job of capturing the feel of Star Wars, and there are times when I'm playing this game that I genuinely feel a part of a larger battle set in the Star Wars universe.

Then there are the times when I'm playing against what are virtually indestructible vehicles, or opponents who are warping around, or I see a flashing "disconnection" icon on my screen and I'm reminded that I'm very much sitting behind a computer using a less-than-perfect piece of software. That's when I think: hey wouldn't a Tweak Guide be a great idea! Well, yes and no  tweaking the game would be a great idea, if it wasn't for the fact that the game was originally designed for gaming consoles like the XBox and PS2, and hence has little to no tweakability in the usual PC sense. But you know me, I'm a sucker for finding tweaks.

So keeping in mind that this game does not have a console, does not have any real .ini/.cfg/.con files which can be tweaked to significantly improve or alter gaming performance, I have nonetheless put together a brief Star Wars Battlefront Tweak Guide which covers the in-game settings in detail, provides troubleshooting information and goes through all the known tips and tweaks for this game. Let's keep our fingers crossed that subsequent patches from Lucasarts will both improve performance and gameplay and also provide a window for tweakers to enter the game's engine and do some fine tuning. 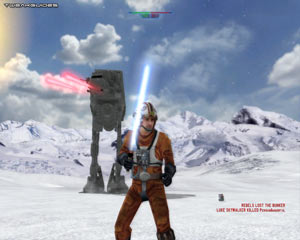 In the meanwhile, as Han would probably say "Let's read this thing so we can all go home kid".


Note: This guide refers to the latest version of Star Wars Battlefront Version 1.3. Make sure to check back regularly for updates.