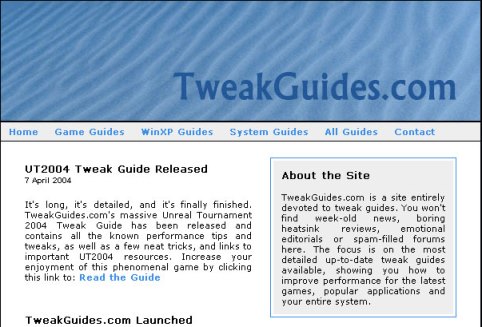 Feeling nostalgic? I know I am! This page provides a quick look at the history of TweakGuides.com, my small corner of the world wide web, starting with the thrilling story of how this site was born.

Amazing to think it was over 15 years ago that I started this website, way back on 1 April 2004. That's right, the site began on April Fool's day when I registered the domain name TweakGuides.com. If you don't believe me, do a whois lookup on this domain - it shows a creation date of 2004-04-01 13:49:15 UTC. No, I didn't start the site as a prank, well at least not consciously. So how did a site about so-called "tweak guides" come about? It was the result of a sequence of events that began in the early 1990s, a time when Hammer Pants reigned supreme, Donald Trump had only declared bankruptcy four times, and Al Gore had recently invented something called the Internet.

Let's take a trip back to 1992. As a 21 year old who had just left University with an Economics degree, I'd given up PCs and gaming, and was focusing on working in my boring new job in the public service by day, and clubbing by night. For several years I had no personal computer, the closest thing being my small blue Nokia 8210 phone. I was literally too cool to be a computer nerd. 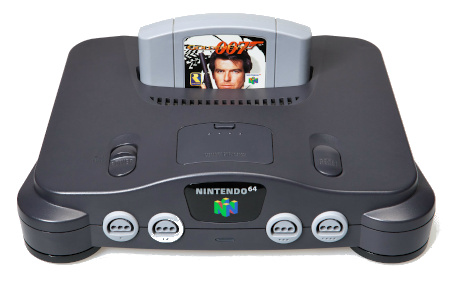 But in 1997 the Nintendo 64 gaming console came out in Australia. It drew me to it with its 64-bit siren song, and I bought one later that year. I loved it and played it often. My favorite games included: GoldenEye, Star Wars: Shadows of the Empire, The Legend of Zelda: Ocarina of Time, and ShadowMan.

In late 1999, I finally returned to the world of PCs and nerdiness, selling my N64 and buying a new system along with my first new PC game: Indiana Jones and the Infernal Machine. This rekindled my interest in tweaking, which had begun in the late '80s and early '90s, sparked by the Amiga 500 (a tale I tell here) and my dabbling with MS-DOS. The Indiana Jones game had graphics settings that I could barely understand, as shown here. I don't know what the developers were thinking. Even today, giving people settings with names like 3D Rasterizers, Buffering, and Mip Mapping results in a lot of confusion; back in late 1999 this was the equivalent of ancient Greek, even to experienced PC gamers.

I so desperately wanted the game to look and run as well as it possibly could on my new system, which had a weak Nvidia Riva TNT2 M64 GPU. I'd been suckered into buying the M64 as part of a pre-built system, under the guise of it being a "newer" TNT2 card - the TNT2 reputedly being a good GPU in mid-1999, the M64 indeed being a newer but detuned version of it. I hadn't done my research, and didn't know any better. That, by the way, was the reason that I never again bought a pre-built system, and learned to research and build my own PCs. 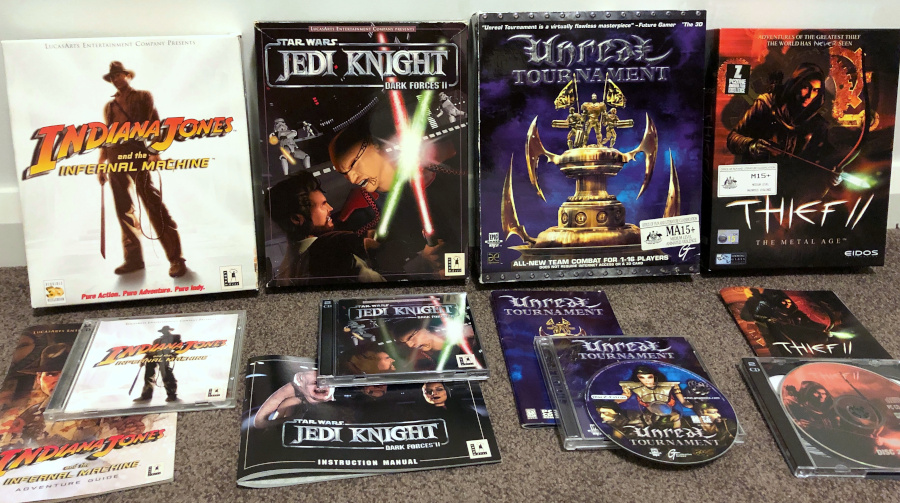 Anyway, I started to play more and more PC games. I found a damaged box copy of 1997's Star Wars Jedi Knight: Dark Forces II still for sale in my local PC store, bought it, loved it. Ditto Thief II: The Metal Age. Then one day, I bought another slightly dishevelled older copy of what seemed to be an interesting game: Unreal Tournament (UT); it had been released in 1999, and this was fully a year later, in late 2000. Unbeknownst to me, I had stumbled upon the addictive joys (and pitfalls) of online gaming.

That's when my interest in game tweaking really took off, because UT had the potential to look great on my recently purchased Diamond Viper II GPU. The Viper II was one of the few GPUs at the time that supported the S3 MeTaL renderer, allowing the use of UT's then-unique S3TC high resolution textures which came on a second disc in the UT99 box - see comparisons here and here, there was a huge difference! For most other purposes, the GPU was actually buggy rubbish and basically killed off its maker S3's chances in the mainstream GPU world. What that meant in practical terms for me was that while UT99 did look fantastic, it crashed. Often. For multiple reasons, including: the buggy GPU and its buggy drivers. The stress that using high-res textures and high graphics settings put on my system. And the fact that I had a Pentium III 550MHz CPU which I had overclocked to a stupidly high 800MHz, and hadn't cooled anywhere near sufficiently. What made it even more annoying was that in UT99, when you crashed while playing online, everyone else who was playing saw it. It was especially embarrassing in Clan matches, because your team was depending on you. I played under the nick PersianImmortal, as part of a clan called Downunder Fighting Force (DFF). People dropping out of clan matches due to system crashes, or for those of us still on dialup, receiving a phone call, was a common enough occurrence, but I'd had enough. I decided to learn more about my PC, and about gaming and graphics settings.

Two more things happened which lead me to start writing guides, and ultimately, to start this site.

The first involved something I discovered in my research for improving my Unreal Tournament experience. It was the Unreal Tournament Tweak Guide, written by Thomas McGuire and first released by 3DSpotlight in 1999. It was amazing. A "tweak guide"? What a great idea! Someone had taken the time to objectively test, and then explain in relatively understandable terms, what all of the settings in Unreal Tournament meant. To this day, some people think that I invented the term Tweak Guide. At the peak of this site's popularity, I'd even see people referring to any such guides, on any site, as "tweakguides" (one word), similar to this site's name. Flattering, but nope - I didn't invent the term tweak guide, I don't own it legally or morally; anyone can use it without my permission. I only own the rights to the brilliantly inventive TweakGuides.com domain name.

The second catalyst was that in late 2001, I was sick of working as a government Economist, and after 8 years of tedium I decided to quit. I got a generous redundancy payout so I didn't have to find another job straight away, it was summer in Australia, I built a new computer, I installed a then-just-released copy of Windows XP, and a few months later I bought The Elder Scrolls III: Morrowind. It was one of the first true open world 3D PC games - the other, Grand Theft Auto III, came out at the same time, but I didn't play it. Morrowind was it for me, everything I wanted in a game. Richly immersive, perpetually interesting and seemingly endless. But also hugely stressful on the PC, and prone to crashing if not configured correctly. I decided to apply my research skills to the game, and I eventually not only got it looking and playing well, I had the temerity to start posting my "tweaking" tips on Bethesda's official Morrowind forums under my gaming nick of PersianImmortal.

Within weeks, the positive feedback I received culminated in an offer from the owner of a site called TweakTown.com to start writing guides for him. I was excited to finally be writing for a real website! After a few days of hectic work, out came my Morrowind Tweak Guide. Many others followed on TweakTown between mid-2002 and the end of 2003, including such highlights as:

You get the idea. Within the space of a year and a half, I'd written 12 full-length tweak guides for TweakTown, and each one of them was getting a lot of extremely generous praise, and a ton of attention from readers and industry players alike. Plus I was enjoying what I was doing. It's not often that a writer will experience a large audience who eagerly want to read their work. Seemed like a win-win, right? Not exactly.

One of the unwritten rules of writing on the Internet is that, typically, web authors receive either very little, or more often, zero payment. They're expected to write simply for the privilege and the exposure of doing so. Even major websites will pay their "contributors", as they call them, peanuts. So having agreed to write for TweakTown on the basis of no payment to start with, even with my obvious success, I was only able to negotiate a ridiculously low payment per guide. And I was struggling to get a new day job after quitting my last one, and my savings were running dangerously low. Meanwhile, the ads on the site were becoming numerous, and increasingly intrusive - remember those hideous contextual text-link/popup ads which appeared within content?

Clearly, something was not fair about this arrangement. I won't go into details, but suffice it to say that although I'll always be grateful for the opportunity TweakTown provided me in getting my work known, I think I repaid the owner many times over by giving him a huge amount of traffic and income while costing him peanuts. So I decided to walk away.

In early 2004, I finally bit the bullet and committed to starting my own site. It may seem odd to a younger person today that back in 2004, starting a website wasn't as easy as going to somewhere like Wix or Wordpress, creating a free account, and putting up content in a matter of minutes. There were basic sites where you could put up a page or two of your own content, like AngelFire and of course MySpace, but they were typically host to headache-inducing eyesores, and not the kind of place you could, or would even want to, host a serious site with many pages of content. Bandwidth was also incredibly expensive.

Finding a stable but affordable web host back then was a nightmare. I cover my initial hosting woes in this article. Equally, being totally ignorant about website coding and design, I didn't know where to start, so assistance from Tim Briers on the Overclockers Australia Forums, by way of whipping up a basic template for me to use, was greatly appreciated. I've since bastardized his code and design many times over, progressively mangling it in an effort to refresh the site.

Below is a gallery of how TweakGuides.com has looked over the years, with snapshots of each reasonably significant or noticeable design change, from 2004 right up to the previous major revamp we had back in 2015: 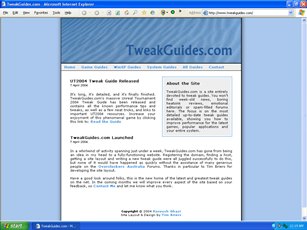 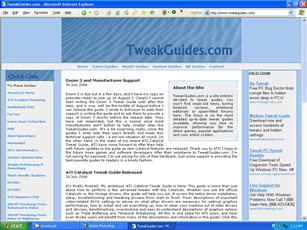 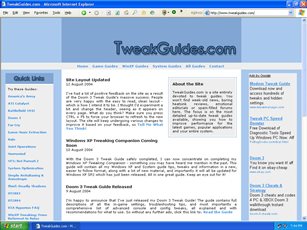 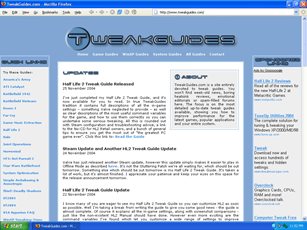 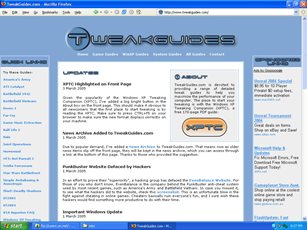 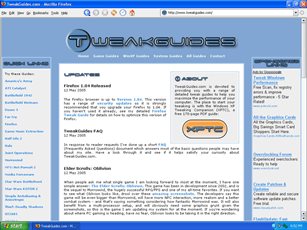 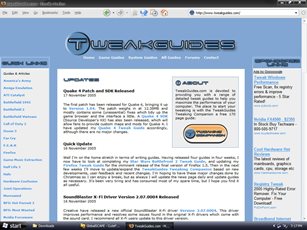 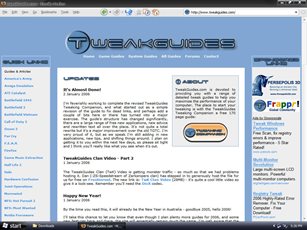 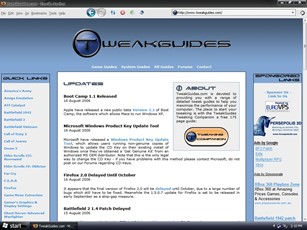 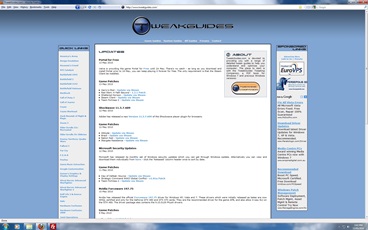 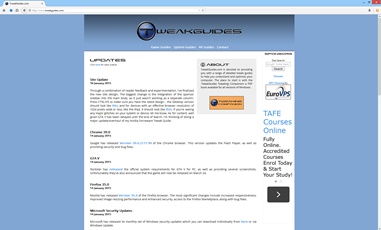 I think you'll agree that I was robbed of numerous rightfully deserved awards for superb website design over the years. But seriously, it did the job of presenting text to readers in a relatively clean layout, keeping bandwidth usage low, and reducing server load during periods of high demand. What it lacked, and still lacks, in terms of whizz-bang features, it makes up for in sky-blue colored unpretentiousness :)

And that, gentle reader, is the tale of how this site began. I know you're desperate to find out more about the glamorous, exciting times I had during TweakGuides' heyday circa 2005-2008, and the adventures beyond, culminating in such amazing exploits as writing for Games for Windows Magazine, and eventually Writing for Nvidia on GeForce.com. Sorry, I'm saving the juicy details so I can hopefully sell them to anybody in Hollywood smart enough to buy the rights to make what would undoubtedly be a smash hit movie based on these events.

In any case, thanks for taking this highly self-indulgent nostalgic trip with me. The journey isn't over yet; look for new content on TweakGuides.com, and in the meantime, take care!